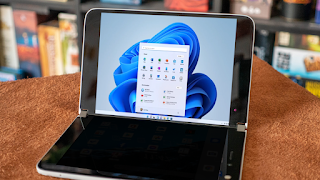 Using the WOA Project, Windows 11 can be installed on the Surface Duo. The adapted UEFI should also support Linux.

Developer and hobbyist Gustave Monce has installed Windows 11 on the Surface Duo. So Microsoft's smartphone with the two screens now also gets a Microsoft operating system. This is made possible by the Windows on ARM Project (WOA Project), which already brings Windows operating systems to devices such as the old Lumia950 XL. Since Windows 11 is also natively compatible with ARM CPUs, the WOA installer could be transferred to the Surface Duo. An early preview of the software is available on Github.

However, the OS currently only works with some limitations. On the one hand, only one of the two screens is recognized. The second display - as a central element of the Surface Duo concept - remains unused. In addition, Monce has so far only tried Windows 11 on the first generation of the phone with 128 GB of flash memory.

There is no guarantee that WOA will also work on the Surface Duo 2 or a Surface Duo with more memory. As I said, this is also a preview. Monce has published a compatibility list of different devices on the project page. The WOA Project is compatible with the 128 and 256 GB version of the European Surface Duo. Besides, it can be used with Android 10 or Android 11 - provided an unlocked bootloader.

Monce confirms that the UEFI used in the WOA Project and necessary for the installation could also boot a Linux distribution. However, this has not yet been tried. In addition, most Linux distributions are not necessarily optimized for touch input. However, the possibility leaves room for further interesting, if not necessarily practical, experiments.