Poco X4 Pro 5G: Successor of the popular Poco X3 Pro comes with AMOLED, 108 megapixels and other improvements from 269 euros 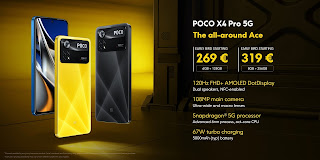 Poco today unveiled the new Poco X4 Pro 5G as announced. In addition to 5G support, the successor to the successful Poco X3 Pro gets various other improvements, including an AMOLED display.

After various leaks in recent weeks and months, Poco has now officially presented the Poco X4 Pro 5G today. This is the successor to the bestseller Poco X3 Pro (from about 250 euros on Amazon), which comes with a number of improvements.

One of the important innovations is the introduction of 5G, which the predecessor still lacked. This is made possible by the new Snapdragon 695 5G, which the manufacturer pairs with up to 8 GB of RAM (up to 11 GB of Dynamic RAM) and 256 GB (expandable) of storage space. The battery is 5,000 mAh in size and charges completely with up to 67 watts in 41 minutes. A corresponding power supply is included in the scope of delivery.

The display of the Poco X4 Pro 5G no longer relies on LCD, but on AMOLED technology. Among other things, this increases the brightness to up to 1,200 nits. The dimensions remain at 6.67 inches, the update rate is still 120 Hz. The touch sampling rate is slightly higher at up to 360 Hz.

Poco has implemented a further improvement in the rear camera. This is still composed of three lenses, but now has a main camera (f/1.9) with 108 megapixels. In addition, there is a 118 degree ultra-wide-angle camera (f/2.2) with 8 megapixels and a 2 megapixel macro camera (f/2.4). The front camera has 16 megapixels. The well-known video modes of the predecessor are of course still on board (e.B. Dual Video). Other features include stereo speakers, IR Blaster, NFC and a headphone jack.

The Poco X4 Pro 5G is available in the three colors Laser Black, Laser Blue and Poco Yellow. The back made of 2.5D glass is decorated with embellishments in the form of laser strips, which give the smartphone its special look. The device is only a good 8 mm thin and weighs 205 g, which makes it thinner and lighter than its predecessor. MIUI 13 is used as the operating system.

The recommended retail price for the Poco X4 Pro 5G starts at 299 euros for the model with 6 + 128 GB. As usual, the manufacturer knocks out the device at the start for a reduced early bird price of only 269 euros. The version with 8 + 256 GB costs RRP 349 euros and starts for 319 euros. This increases the RRP costs by 50 euros compared to the process. Sales will start on March 2.