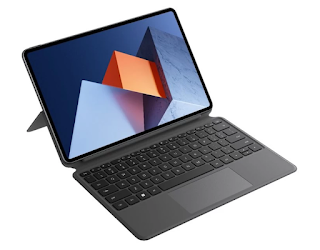 At THE MWC 2022 in Barcelona, everything at Huawei is under the sign of the Smart Office. One component of this is the MateBook E with Windows 11.

New smartphones will not be seen from Huawei at MWC 2022 in Barcelona. Instead, the Chinese company focuses on work tools such as the Huawei MateBook E, which is reminiscent of Microsoft's Surface tablets with a detachable keyboard and folding stand integrated into the case.

The MateBook E is a tablet with 12.6-inch OLED display weighs 709 grams without keyboard and included pen according to the manufacturer. The screen resolves with 2560 × 1600 pixels and thus achieves a pixel density of 240 dpi. Huawei specifies the maximum brightness as 600 nit. Intel chips of the eleventh generation are used as processors. These can access different amounts of memory, the chips comply with the LPDDR4x standard. Like the main memory, the battery is also permanently installed, with the capacity of 42 Wh, the Huawei MateBook E should survive a working day without charging.

Control center of your own ecosystem

On the software side, windows 11 is used on the MateBook E, but extended by some special functions from Huawei. Thus, the MateBook E can be wirelessly paired with Huawei tablets, smartphones and monitors running EMUI or the new Harmony OS development. Huawei makes the Windows device the control center of its own ecosystem, this function was baptized by the Chinese Super Device. In practical use, the close integration of the devices can result in advantages, but many features, such as drag-and-drop between smartphone and OC or telephoning on the computer, can also be achieved with alternative solutions.

Huawei equips the MateBook E with a USB-C port, a Thunderbolt socket and a DisplayPort. There was also room for a 3.5-millimeter jack socket. Wirelessly, the Huawei tablet transmits via WiFi 6 and Bluetooth 5.1.

Huawei offers the MateBook E in two variants: The cheaper one costs 649 euros and comes with Intel Core i3, 8 GB of RAM and 128 GB of Flash, the second variant is significantly more expensive at 1199 euros. However, there is also a more powerful processor (Intel Core i5) and more memory (16 GB RAM and 512 GB Flash) in it. The top version with Intel Core i7, which Huawei also lists, will not appear in Germany for the time being. Sales are scheduled to begin in mid-March, with only gray being offered as a color. The digital stylus is not included in the scope of delivery of the Huawei MateBook E, but the Smart Magnetic Keyboard and a 65-watt charger with a matching USB-C cable.