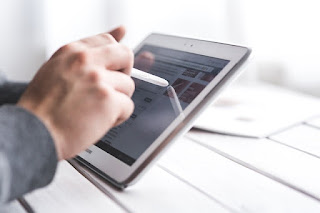 Samsung has once again shown concept devices with flexible OLED displaysat CES 2022. It goes beyond its currently available foldables technologically and demonstrates what the future could bring. It should be mentioned that the concepts of Samsung Display have been presented. They should therefore encourage partners rather than refer to possible upcoming products from their own company.

For example, the Flex S, which can be seen on the article picture, was shown, which can be folded twice. When folded, you still get a fairly large front display, then unfold a fairly wide screen in the format 16:10.

The Flex G, on the other hand, basically follows a similar concept, but folds the screen inwards so that it no longer shows a screen to the outside when folded. This has the advantage that the screen is better protected.

The Flex Note, on the other hand, is a notebook with a 13-inch diagonal without a physical keyboard. Essentially, the device offers a large display that is spread over the two halves and can display different contents. For example, one half of the demonstration was used to display control options for a game.

Even a smart speaker with a flexible 12-inch display was shown at the fair. On the one hand, the screen curves around the speaker, but can be pushed forward via motorized arms at the push of a button and then act like a flat tablet.

All devices described here are prototypes and one should not expect to spot such products for the mass market in the near future. But the concepts are always interesting.