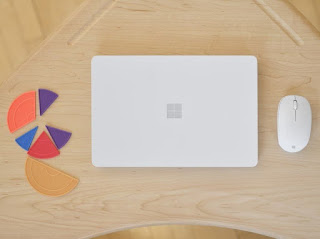 Two things are unusual: First, a Surface device seems to be easy to repair. On the other hand, Microsoft is making a video about it.

Microsoft builds almost only heavily glued and hardly self-repairable products. An exception seems to be the upcoming Surface Laptop SE. The notebook for schools and other educational institutions is not only relatively cheap, but also plugged in to a large extent. Microsoft proves how easy it is to disassemble the device and in an unusual way for the company: with a teardown video on its own Youtube channel.

Although it is a bit more difficult to open the device, this step already shows that wearing parts such as the keyboard can be easily removed and replaced. It is also possible to quickly change different layouts (ANSI or ISO) - depending on the application.

Components such as the display and the battery are also plugged into the motherboard using a ribbon cable. They can be easily disconnected by loosening the clamp. By the way, the battery is also screwed. A possible change is so easily possible. The display module and all other internal components are locked to the housing with Philips screws and are modular.

Apart from the WLAN module, components such as RAM, flash memory and SoC are soldered to the motherboard and therefore not separately replaceable. The system is equipped with Intel Celeron CPU and eMMC memory.

The Surface Laptop SE with 11.6-inch display is initially offered in the U.S. for a price tag of $250. It installs Windows 11 SE, which restricts the installation of software to a selected list of products.