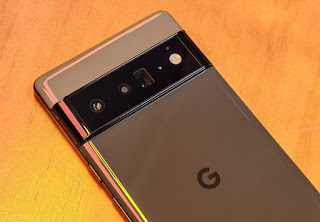 In the second part of our review of the Google Pixel 6, we had taken a close look at the image quality, among other things. In this third part, we will discuss the camera app with its functions as well as setting options and the performance of the smartphone in practice. In the end, we summarize our results and draw a conclusion.

With the camera app of the Pixel 6, Google relies on a well-known design, it is very clear. However, this is also due to the fact that Google makes only a few options accessible. To the right of the live view are buttons for the lens or the focal length, but the 2-fold option is only simulated digitally as already mentioned.

Next to it are the photo shutter release and the buttons for playback mode, as well as switching between cameras on the front and back. The choice of shooting mode is done by swiping or sliding, the app offers the following modes: night vision, motion, portrait, camera, video, panorama, 360° and lens. The latter three programs are hidden behind the "Modes" option.

Important options are within reach via the command dial :

More options can be found behind the command dial to the left of the live view. Here you can set whether you want to work with the night vision mode or the LED light in low light, which image formats are stored, whether the "Top Photo" (here you can select the best image of a series, among other things) is active or which aspect ratio (4:3 or 16:9) the images should have. In addition, a timer of three or ten seconds can be set. Behind the other settings are the choice of resolution, the presence of video stabilization or a switchable grid.

Unfortunately, the app offers very few manual options. In addition to the brightness of the image and the shadows, the white balance can also be adjusted. As usual, the focus point is set by touch. Unfortunately, photographers have no influence on classic exposure parameters such as shutter speed or sensor sensitivity. If you want to set something yourself, you will be happy with the Google Pixel 6. Of course, you could use other apps in this regard, but we only evaluate the functions of the pre-installed app.

On the other hand, we find it very appealing that Google displays the recording mode when playing back the images and videos. This makes it possible, for example, to immediately see whether an image has been taken with night vision mode.

Google has basically not skimped on software features. These include, among other things, the already mentioned photo program for motion simulation or the "Magic Eraser". With the motion simulation, really appealing images can be created, with the eraser disturbing image parts can be removed. All you have to do is mark them, Google will do the rest. The feature works like Adobe's Photoshop Content-Sensitive Fill feature, replacing highlighted image parts with textures in the environment. As with Photoshop, this works sometimes well and sometimes less well, Photoshop usually delivers much better results. For laymen, the results may be ok, we only classify them as "sufficient".

After Google had recently relied on classic SoCs from Qualcomm for many years, the Pixel 6 and the Pixel 6 Pro use a specially designed system-on-a-chip. The tensor-christened SoC has two Cortex-X1 cores with 2.80GHz, two Cortex-A76 cores with 2.25GHz and four Cortex-A55 cores with 1.80 GHz. In addition, there are the GPU of the type Mali-G78 MP20 and 8GB LPDDR5 RAM. Among other things, the company's own chip design has been optimized for the use of artificial intelligence, allowing Google to prefer certain tasks over others.

The performance of the Tensor SoC is very good in the test, but for one of the first places in the ranking it is not quite enough, at least in the processor benchmarks. However, the 1,040 points we measured in Geekbench 5.1 (single-core value) and 2,901 (multi-core value) can still be classified as very good. The PCMark Work 3.0 resulted in a good 10,463 points, the Wild Life test of the 3DMark very good 6,883 points. The GPU is thus in the range of the best Android models. The situation is somewhat different with the 128GB UFS 3.1 memory. When reading, the measured values of 1,300MB/s are still very appealing, while when writing, the Pixel 6 with 269MB/s is only found in the midfield. In practice, however, this does not bother in most situations. However, installing large apps will take a little longer than other high-end smartphones. We think it's a pity that Google waives the possibility of memory expansion as usual. With only 128GB, you are quickly dependent on the outsourcing of data to the cloud.

In summary, the Google Pixel 6 offers enough performance for all tasks in everyday life – without achieving any record-breaking benchmark results. But it doesn't have to, Google has put the focus on other things. These include the camera's AI functions or translation into 55 languages. With three years, a long support period is offered, security updates are even available for five years. The battery with 4,614 mAh capacity lasted in the test for a very convincing 14 hours when watching Youtube videos (extrapolated from a consumption of seven percent per hour).

Google offers with the Pixel 6 a smartphone that offers a round overall package with a few exceptions. Of course, the camera function has the greatest importance for our test, here the smartphone can convince for the most part. Thanks to the large sensor of the main camera and the always undisputed software competence of Google, the images and videos know how to please very much. In terms of detail reproduction with only 12.5 megapixels, the images clearly do not reach the best models with higher resolutions, but in 90 percent of all cases this does not matter. In everyday life, 12.5 megapixels are sufficient for practically all tasks. In addition, the photos score with a suitable exposure and a large dynamic range. However, you have to like the quite strong HDR effect.

In difficult lighting conditions, the Pixel 6's main camera also knows how to please. Even dim light allows appealing images, with the night mode you can shoot from the hand in almost complete darkness. The ultra-wide-angle camera delivers appealing photos during the day, at night the difference to the main camera is very clearly visible. In most cases, we classify the recordings as neat, but with a larger sensor, Google could have achieved much more.

The Pixel 6 cuts a very good figure in videos: Many details and a large dynamic range can be mentioned on the credit side. The very well-working optical image stabilizer also contributes to this, and the autofocus also focuses quickly and accurately at all times. This applies equally to photos and videos. We find it a bit of a pity that only the main camera allows recordings in 4K resolution with 60 full frames, the implementation in the app (omitting the UWW option at set 4K60p) we also do not consider optimal. Speaking of the app: Basically, we classify the structure of the app as successful and clear, but Google leaves points with the manual options. These are almost completely absent, the choice of brightness and white balance are too little for ambitious photographers. The apps of the competition usually offer much more options. Since the automatics of the Pixel 6 work very well as mentioned, this should not bother most users. Nevertheless, we think: Google has left unnecessary potential here.

The Google Pixel 6 has a main camera with very appealing photo and video features:

The housing of the Google Pixel 6 convinces with a very high quality, seals according to IP68 standard provide the necessary robustness and the battery lasts a very long time. The 6.4-inch display reproduces details with 2,400 x 1,080 pixels very well, the playback with 90 Hz ensures a smooth display. If you need an even better panel, you can use the Pixel 6 Pro. This also applies to anyone who wants a dedicated telephoto camera. The Pixel 6 allows decent images at medium focal lengths, but the subject should not be too far away. The Pixel 6 is not suitable for "real" telephoto images.

The Tensor SoC works more than fast enough in everyday life. The fact that it is not one of the absolute top models will effectively not bother anyone. On the other hand, we classify the fingerprint sensor as less successful, which works noticeably slower than with other upper-class smartphones. Since it is used very often and Google does not offer an alternative to easy and secure unlocking, this weakness should not be ignored. Apart from this point, we can only see the non-expandable memory as a weakness of the Pixel 6. The list of strengths, on the other hand, is much longer. From our point of view, they make the Google Pixel 6 a successful camera smartphone when mainly the main camera is used. If you often want to take pictures with a longer focal length, you should definitely use the Google Pixel 6 Pro.