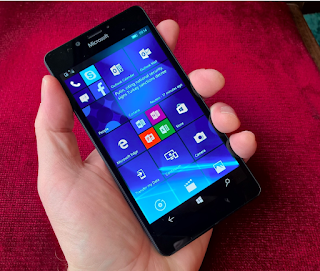 Windows Central, together with a developer, got Andromeda OS working on a Lumia 950 smartphone. Andromeda was intended as an operating system for dual-screen devices like the Surface Duo, but was canceled in 2018.

The build of Andromeda OS is very similar to a custom variant of Windows 10 Mobile; the lockscreen, start menu and app list correspond almost entirely to that mobile operating system. It's not clear if the final version would have kept this design as Windows Central insists that the build they're showing is a "rough," pre-release version with missing features and an interface that's not finished yet.

One of the most striking aspects of Andromeda OS is the ability to write on the lockscreen. For example, without having to unlock the phone, users could have left notes on the screen that the smartphone would then save. Later these notes could be viewed again. For this, the smartphone works together with the Surface Pen. In addition, the writing also worked on the home screen of the phone, where users could place notes, images and 3D objects.

The canceled operating system also worked with gestures, so that the Start and Cortana buttons at the bottom of the screen would disappear when an app was launched. To navigate back to the home screen, users had to swipe right from the left side. To use Cortana, users had to swipe left from the right. In this Cortana screen, the notifications could also be seen. The smart assistant should have acted as an 'administrator' of all notifications in Andromeda, writes Windows Central.

A swipe from top to bottom should have opened the Control Center, where things like Wi-Fi, brightness, volume and music playback could be managed. According to the medium, the UI in this screen seems to indicate that Microsoft wanted to use the Fluent Design design of Windows 10 in Andromeda OS as well. Microsoft also experimented with a Radial UX Menu, a selection of buttons so that users did not have to swipe to see notifications, for example.

Andromeda was based on Windows and was intended as an operating system for 'pocket PCs with calling functions'. The Surface Duo, a device seen as a smartphone, should have initially gotten Andromeda. Eventually, the device got Android. Windows Central worked for the build together with Gustave Monce, who writes on Twitter that the smartphone is anything but stable and often restarts. Although Microsoft did not plan to release a Lumia 950 with Andromeda OS, this smartphone was used internally to test the operating system. As a result, there are images of Andromeda for the Lumia 950 and Windows Central managed to get the operating system working.