AMD Ryzen 9 6900HX in Geekbench: Fast, but not fast enough for Intel 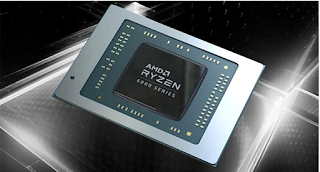 A pre-tested Ryzen 9 6900HX is a third faster in Geekbench than its predecessor – Intel's Alder Lake processors still remain unmatched.

Geekbench's benchmark database provides a first result on AMD's upcoming eight-core Ryzen 9 6900HX processor for notebooks. A Lenovo model with the CPU scored 1593 points in the single-threaded test and 10,151 points in the multithreading test. Compared to the predecessor Ryzen 9 5900HX (approx. 1400 /7700 points), this corresponds to an increase of around 12 and 33 percent respectively.

AmD refers to the up to eight CPU cores in the Ryzen 6000H family as Zen 3+. However, there are no major architectural innovations compared to the 5000 series. The plus comes from faster memory and higher clock frequencies, thanks in part to the finer 6-nanometer production at TSMC (Ryzen 5000H: 7 nm) and thanks to a revised energy management. A lead of 33 percent is thus already above expectations, as the maximum boost of the Ryzen 9 6900HX just increases from 4.6 to 4.9 GHz. The all-core boost apparently benefits more in everyday life.

Nevertheless, this is not enough to get to Intel's new notebook processor series Alder Lake-H. The top model Core i9-12900HK with six performance and eight efficiency cores, for example, achieved 1821 points (single-threading) and 13,971 points (multithreading) respectively in geekbench.

AMD, meanwhile, is focusing on integrated graphics in the Ryzen 6000H, which for the first time within the Ryzen family relies on the RDNA-2 architecture of the Radeon RX 6000 series and replaces the veteran GCN/Vega architecture of its predecessors. The new combo processors could therefore be particularly attractive in notebooks without stand-alone graphics chips – especially since eight Zen 3+ cores should still be "fast enough" for the vast majority.