A great number of public hotspots and internet cafes has appeared recently. It's great to surf the net at public places, while drinking morning coffee or waiting for the airplane. But have you thought about security? 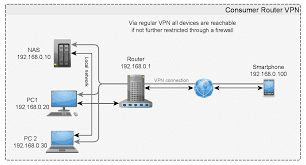 Most public Wi-Fi hotspots are insecure. That means that anyone in the same wireless network can capture the data you send or receive on the net: your e-mails, your passwords, your files - virtually anything.

Even if a hotspot looks like secure and has encryption enabled, it's owner, or admin, or a hacker can do the nasty things mentioned above.

Would you like your data to be stolen? Or you'd like to become a paranoid and don't do anything on the public net except for reading news? Nobody wants.

One of the best solutions to make yourself safe and secure on the Internet is using Virtual Private Network (VPN) tunneling.

Your computer establishes a direct link with the VPN server. The link is heavily encrypted, which makes it useless to intercept it. Even if someone captures your VPN connection, he'll only get a bunch of useless data, which is virtually impossible to decrypt.

And the great thing is that you get a full access to the Internet, which could not be sniffed by anyone - hackers, hotspot owners, technicians from your ISP, even government. It also hides your IP address on the Net, so nobody, neither bad guys nor website owners can find your location.

Sounds too good to be true? Well, let's mention countries which practice Internet censorship. The biggest is China, which has more world wide web users than US population is. Some of the most popular resources, such as YouTube, Facebook and even Wikipedia are blocked in China.

And guess what, VPN is being used by lots of Chinese people, helping them to bypass the limitations, the so-called Great China Firewall set by their communist government. Yes, they have full access the Internet, they can send any information they want, etc. And nobody can track them!

Isn't it a great thing to use in the corporate network? Nobody can track your actions on the net! Anyway, lots of VPN service providers have appeared nowadays. The most important problem is that most of them are paid. But there are some which don't require purchasing their servers.

One of them is Alonweb, which offers Secure Socket Layer OpenVPN tunneling service, several servers to choose from, and best of all: it's completely free! Alonweb makes its users feel safe on the Net. Currently Free VPN service offers its users connection via two servers: Netherlands and Panama.

Although some limitations exist (1Gb of data traffic per month is available, maximum HTTP request size is 2Mb, heavy traffic consuming protocols and games are blocked) it is enough for most of the users.

However, if you need more, you can upgrade your account to Premium service, which doesn't have the above limitations and is completely ad-free. A wider choice of servers (USA, Germany, France, Russia, Canada) will suit your needs more accurately.